As a no-kill shelter, we specialize in helping cats that would typically get euthanized in other shelters. We are proud to help all of the cats that wouldn’t have a chance otherwise. Unfortunately, they tend to come with large vet bills or specific medical requirements to help them live happy lives in their foster homes for long periods of time.

Below are listed some of our long-term fosters and their specific needs. These cats are not currently available for adoption and may live the remainder of theirs lives in our care. If you are interested in sponsoring one of these kitties, please take a look at our donation page for more information.

Lincoln is a special boy. He has a sweet and loving personality with a slight quirk – he bites. He is around 5 years old and a chunky boy with a half tail. He loves to rub on your legs, but doesn’t want to be touched. He will lick your fingers and knuckles. He truly is a sweetheart who gets overstimulated due to pain and shows his excitement by biting. Our hearts are heavy for him because we know how great of a kitty he is but this quirk makes him hard to adopt. The vet says that his tail was previously broken and is compressed at the base of his spine which is what is causing him pain. The rescue, including volunteers, just love him.

Pusser is quite an odd ball but also a fun kitty who is 2 years and 5 months old (as of 5/2022). He loves to be with people and play with them BUT he’s not ready to be held or touched a ton. He needs an understanding person who will respect his limits and work with him. At times he loves his head and neck rubbed. If you want a fun companion he’s the one. Pusser does have a sweet side and loves to lay in bed with his humans. I would not recommend him for young children. He’s currently fostered in a home with a dog cats and a 10 and 13 year old child. The children have grown up fostering cats so they love him because They understand that every kid is different. They also know where his limits are. He has made progress in his foster home and loves to play with his foster’s children.

20-269 Miss Kitty Is a very pretty girl with a black body and white whiskers that stand out. However she does not like to be touched. She loves to be around people and gets excited for treats and food. She will even lay at your feet. But go to touch her and you’ll get smacked. If you keep pushing it you’ll get bit. I have tried to make her an outside cat three times but she sits at my door and cries for hours.

(As of 7/14/2022) Lucy “Miss Kitty” is an advanced age senior. He was found in the middle of the road. He has cataracts and is having surgery for entropic eyelids (the eyelids fold into the eye causing irritation). Luke had dental surgery on 07/13/2022 and had 6 teeth removed but he’s still as sweet as can be. He also had bloodwork and x-rays done which came back normal. Luke is blind and deaf but the sweetest fluff ball you’d ever meet.

Old Man!!!! Super sweet 12-15 year old boy. He loves to snuggle! This sweet boy has no teeth due to stomatitis and requires a canned food diet.

Buddha, 13 year old Red Mitted Ragdoll. Buddha lost his home when his owner died. His current foster home is his 5th home. Don’t let looks fool you, while he’s gorgeous he is not outwardly social and prefers to sleep most of the day. He does let his servants know when he needs something.

Winston, 10 plus year old male. Winston was sadly returned as he is very shy. He’s been in foster several months and still hasn’t warmed up to his foster family but is slowly getting there.

Camden was living outside in a colony. She had an upper respiratory infection when she came into foster care. She has been on different antibiotics but it’s been a challenge to get her breathing better. She also has a growth on her tongue, which is an allergic response called an eosinophilic granuloma. She is FIV+ which may account for the slow healing. She gets prednisone twice daily to shrink the growth. She is very sweet, loves people and other cats most of the time. She is a calico so she’s got a bit of spice.

This is Frank. He was living outside in a colony of cats. He has had several health issues including upper respiratory infections, skin issues, and currently pneumonia. He looks way better than when he first arrived, though. He loves all cats, especially another long term-foster, Wheezy. While Frank continues to try to heal, he is the greeter to all new foster cats. He shows them the ropes and will lick and snuggle them too. He is FIV+ but he is the dearest soul and would never hurt anyone.

22-765 Snaggs is a tiny little love bug. The vet described her as a geriatric mess. She is malnourished and was flea infested. She has horrible teeth what’s left of them. Once she’s fattened up a bit she will get the rest of her teeth removed. Her blood work was very good even her thyroid. For now she’s being loved on by a wonderful foster home. She’s good with dogs and cats and gentle children.

Would you like to donate wishlist items to us? 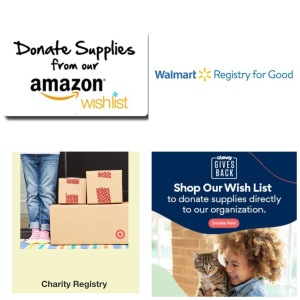 We have our wishlist items on our Target and Walmart registries as well as on our Amazon and Chewy Wishlists in our Wishlist area on our website. Kitten season is here so we can always use liter and kitten food. All items are directly shipped to us for your convenience. Thank you so much! We truly appreciate all donations we receive.